Nothing seems more quintessentially baby to me than a baby bonnet!  And no fabric seems better suited for one than Liberty of London’s gorgeous Tana Lawn. It’s just the right  material for this classic garment: soft to the touch and in patterns sweet enough to rival even the cutest little baby face. But when you have a baby born in the height of winter, with snow falling and winds howling, however cute and charming it is, a delicate hat of just lightweight Lawn won’t do. And so, for the winter baby, I made a Winter Baby Bonnet. Michael Miller’s sumptuous Organic Sherpa adds an extra cozy layer and an extended tie doubles as a mini scarf. Decorative and functional, this Winter Baby Bonnet perfectly frames the baby’s face while keeping her sensitive head protected from the elements. With so many beautiful Liberty prints to choose from, I know I’ll be making one for every winter baby I know! – Corinne These are enough materials to make one hat in any size.

To print the PDF template, be sure to first download the pattern and then print it. This means rather than simply clicking the link and opening the PDF in a browser window, you should click on the pattern link using the “right click” or “control click” option on your mouse or keyboard. This will give you the option to “Download the linked file.” Once the file is downloaded, it should print like a charm!

Prewash all fabrics before starting. This is particularly important with the Organic Sherpa, which shrinks quite a bit with its first wash and dry.

The right side of the Organic Sherpa is the fuzzy side.

This pattern is also available as a printer-friendly PDF. Just click here! The Organic Sherpa only has one grain line, and it runs parallel to the selvedge and along the line of the knit. Line it up with the template, as shown above. Working with the Liberty of London pieces and with right sides facing, pin one long edge of the Rectangle to the long outside curve of one of the Hat Sides. It can be tricky to keep curved seams wrinkle-free. Use a lot of pins to ensure that the seam will come out un-puckered and smooth. Sew around the pinned curve. Repeat with the second side. This is the Outer Hat. Now, working with the Organic Sherpa and with right sides facing, pin one long edge of the Rectangle to the long outside curve of the Hat Side. The knit fabric is much more flexible around the curve than the Liberty of London, so you shouldn’t need as many pins to keep the seam flat.

To sew, change the foot of your sewing machine to the walking foot and stitch along the pinned curve. Cut notches in the seam allowance along the curve. Finger press the seam open.

Repeat with the second side. This is the Lining.

Attach the Outer Hat and Lining With right sides together, slide the Lining inside the Outer Hat. Pin the pieces together along all edges. With the walking foot still attached to the machine, sew around the pinned edge, leaving the short end of the Rectangle at the nape of the neck open. Backstitch at the beginning and end of the seam.

Trim the seam allowance along the sewn edge, leaving the unsewn area untrimmed. Pull the hat right side out through the unsewn gap. You may need to use a tool, such as a chopstick or the eraser-end of a pencil, to push the hanging ties through. Thread a length of cotton thread onto a needle and use a ladder stitch to close the gap at the nape of the neck. Here’s how: Fold the edges under so that they align with the adjacent seams. Pull the needle from the wrong side to the right side of the hem’s fold so that the thread’s knot is inside the hat. Insert the needle into the opposite fold, directly across from the exit point, picking up about ¼-inch of fabric. Go back and forth like this, sewing through the folds, until you reach the end of the opening. Tie a knot at the end.

Pull the thread through the hat and snip it at the exit point to hide the end. 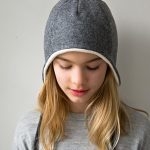 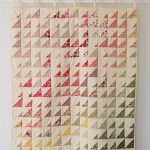 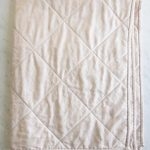 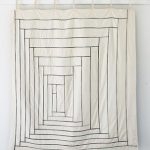