Magic Loop: Two At A Time

For knitters with an aversion to double-pointed needles, Magic Loop is a way of life! Using just one long circular needle, you can even knit projects with tiny circumferences in the round… And once you’ve mastered one sleeve, sock, or hat at a time, why not try two? Here, we’ll show you everything there is to know about knitting two pieces at a time using the Magic Loop technique.

First, brush up on the ins-and-outs of Magic Loop with our video, below.

What You’ll Need For Two At A Time Knitting…

To work two pieces at a time with Magic Loop, you’ll need longer-than-usual circular needles (here we’re using a 40-inch length) and two balls of yarn, one for each piece you’ll be knitting. While it’s possible to work from one center-pull ball of yarn by pulling one strand from the outside and one from the inside, it’s not worth the confusion! Instead, wind one skein into two similarly sized balls or use two entirely separate skeins.

Using one ball of yarn and the circular needles, cast on half the number of stitches required for the first piece of knitting. Our pattern requires 30 stitches per piece, so we cast on 15 stitches here. Drop this yarn; you’ll come back to it later.

With the second ball of yarn, cast on the full number of stitches required for the second piece you are knitting, right next to the previously cast on stitches. Here, we cast on 30 stitches.

Slide the full set of cast-on stitches to the middle of the needles, with the half-set of stitches just to the right.

Turn the work so the needles are pointing to the left, with the half-set of stitches on the back needle and the full set of stitches divided equally between the back and front cord at the right.

Now, with the working yarn from the original half-set of stitches, continue casting on the remaining stitches for the first piece onto the front needle.

JOIN FOR WORKING IN THE ROUND

Checking once more that the stitches aren’t twisted, hold onto the back stitches of the first piece and pull the back needle to the right. Continue pulling so that the cord has enough slack for you to turn the needle…

… and knit across the first-piece stitches on the front needle, joining in the round. When you reach the end of these stitches, drop that working yarn.

Checking one last time that the stitches aren’t twisted, use the second piece’s working yarn coming from the back needles to knit across the second-piece stitches on the front needle, joining that piece in the round,

Knit across the stitches on the front needle, using the working yarn attached to each piece, and re-orient the work to begin the next row. Your work should look like the image above, with one full row complete. Repeat these steps, as for Magic Loop.

When it comes time to end your knitting, bind off the first piece’s front needle stitches according to the pattern until there is one stitch left on the front needle, and the remaining stitches are still on the back needle (as above). Drop the yarn and set aside.

Do the same for the second piece, then re-orient the work so the back needle is ready to continue binding off the remaining stitches (as shown at 6:20 in our Magic Loop Tutorial).

Once you have bound off all the stitches from both pieces, one loop will be left from each piece. Simply cut both working yarns and pull the last loop through.

Got it? Now you’re ready to knit two pieces at a time with Magic Loop! 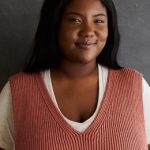 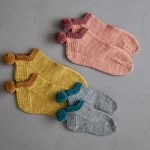 3 comments on “Magic Loop: Two At A Time”

PRINT
3 comments
Close
Thank you for subscribing!
TO TOP