I’ve always been reluctant to try the so-called “Spit Splice,” obviously because of its name. But when I first knit with Purl Soho’s Gentle Giant yarn, it occurred to me that I would finally have to meet this technique… And if all went well, to rename it!

All did go well. In fact, it went great, and so, we introduce the Wet Splice! It’s a wonderful alternative to weaving in ends when you’re using yarn that easily felts. Gentle Giant is a perfect candidate because it does just that, plus it’s so bulky that weaving in its ends is unsatisfying at best. I took the spit out of this splice, but if you find yourself in a jam, a quick suck on the ends of your yarn does do the job and is unlikely to kill you! -Whitney First, splay open the last inch or two of each end of the yarn you want to splice together. Remove some of the fibers from each end, so that the join won’t be too thick. Dip each end into a glass of water. Try to just moisten the ends, not saturate them. Overlap the two ends and rub them somewhat vigorously with a (clean) hand over a taut piece of (colorfast) fabric, like the pants you’re wearing! You could also rub them back and forth between your hands. The friction you create will felt the two ends together in a nearly seamless bond. There’s a Wet Splice in here somewhere, but I don’t see it! 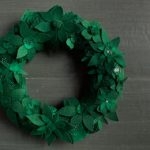 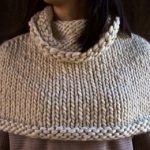 PRINT
46 comments
Close
Thank you for subscribing!
TO TOP