A classic hat topped with a super spunky pom pom is a wonderful last-minute knit that will definitely add a little boost to any day!

Our Speckled Pom Pom Hat is sized for babies to adults and is as quick and simple as can be. Knit in the round from the bottom up, we used our chunky Super Soft Merino in Heirloom White. We like its new fallen snow purity as a ground for punchy pom poms in a fruit basket of colors!

To make our pom poms nice and dense and fluffy, we used our Pom Pom Maker Set, which includes two U-shaped makers and six trim guides. For all the basics of making solid color pom poms, check out our Pom Pom Tutorial. Or to discover a world of fancy pom poms, like all-over sprinkles, patches of color blocks, and scattered polka dots, pick up our Pom Pom Pattern, too!

Share your progress and connect with the community by tagging your pics with #PurlSoho, #PurlSohoBusyHands, #PurlSohoSpeckledPomPomHats, and #PurlSohoSuperSoftMerino. We can’t wait to see what you make!

NOTE: The Adult Large size uses exactly 1 skein of MC, not including the pom pom. If making a Speckled Pom Pom, you will need a second skein of MC.

Place a marker and join for working in the round, being careful to not twist the stitches.

Cut yarn and thread it onto a tapestry needle, then thread tail through remaining stitches. Bring tail to inside of hat and weave it in.

If you’re using Purl Soho’s Pom Pom Maker Set, use the Large Pom Pom Maker and the 2½ inch Trim Guide to make a pom pom. Follow the basic instructions found in our Pom Pom Tutorial, with these modifications…

Holding two strands of CC together, pulling from the inside and outside of the ball, wrap the two strands of yarn around the Large Pom Pom Maker 60 times (120 total revolutions) and tie with a piece of CC.

Variation Of A Sprinkled Pom Pom

Holding three strands of MC and one strand of CC together, wrap all four strands of yarn around the Large Pom Pom Maker 30 times (120 total revolutions) and tie with a piece of MC.

NOTE: To hold three strands of MC together, split the ball of yarn so one is about twice as large as the other. Pull from the inside and outside of the larger ball (2 strands of yarn) and pull one strand from the smaller ball.

With the 2½ inch Trim Guide, trim the pom pom a bit outside the edge of the Trim Guide to create a 3-inch pom pom.

Weave in the ends and steam if desired! 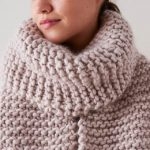 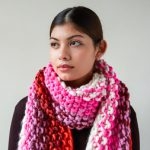 PRINT
41 comments
Close
Thank you for subscribing!
TO TOP