Walking down Broadway towards Purl Soho, past the glittering flagship stores, it’s hard to imagine that the neighborhood streets were once tiled entirely in cobblestones. But turn onto an ankle-twisting street like Mercer or Wooster and we meet the vivid evidence of Soho’s complex past. The beauty of New York City’s remaining cobblestones inspired my knubbly, knobbily Cobblestone Scarf. I knit it with three of my favorite Purl Soho yarns: rustic Flax Down, soft Alpaca Pure and polished Mulberry Merino. Knit in combination, the three yarns bring out the best in each other and create a fascinating texture that looks as if it were built brick by brick.

Creating this Cobblestone Scarf is nowhere near as difficult an undertaking as repaving Broome Street. Simply knit one row of seed stitch in each of the three yarns. No stranding, no tricky slip stitch patterns and no trowels or mortar to speak of. It’s stunning and surprising, just like New York City itself! -Gina

To knit your own Cobblestone Scarf, you will need…

The two color combinations, shown above, are…

You will also need…

This scarf is worked in seed stitch, alternating between 3 different yarns every third row. You will not cut the yarn between each row. Instead, at the end of each row simply drop the old yarn, turn and begin the next row with the next yarn. Take care to not pull the new yarn too tight when beginning each row.

With Mulberry Merino, cast on 41 stitches.

Join Flax Down, but do not cut Mulberry Merino (see Note section, above)

Join Alpaca Pure, but do not cut Mulberry Merino or Flax Down

With Mulberry Merino, bind off in pattern.

Weave in the ends. Block as desired and enjoy your Cobblestone Scarf! 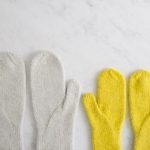 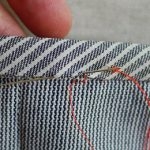