This summer on the streets of Soho I noticed that last winter’s big cowl trend wasn’t going away, even in the hottest weather. Instead of  the bulky knits of winter, these summer versions were sewn in lightweight silk, cotton, and linen fabrics and were worn like flowing necklaces over tank tops and sun dresses. I am someone who hates to be hot, so even though I admired these pretty summer scarves, I couldn’t imagine putting something extra around my neck in the sticky heat. But since the weather has started to cool down, I’ve been yearning for an oversized sewn cowl of my own!

For a simple look with a natural beauty, I chose two of Purl Soho’s most special fabrics, Sheer Linen and Duo Weave Linen from Globalweave. They both have a gorgeous drape and come in a lovely palette of soft colors, from lichen to ash to butter.  To contrast with the subtle elegance of the linen, I added a sweet pom pom trim around the edges. The effect is somewhere between a beautiful scarf and a charming necklace!

Wear the Pom Pom Cowl loose and long or doubled up around your neck for warmth. It’s the perfect thing to stash in your bag when you’re not sure if you’ll need another layer. I know it’s going to be in my bag all season!

Linen like this can be very hard to cut on grain if you’re just using scissors or a rotary cutter, so instead it’s best to “pull a thread”. Make a tiny snip about 1-inch from the raw esge in the selvage and pull one of the weft threads across the entire width of the fabric. (The weft threads run from selvage to selvage, the warp threads run along the length of the fabric.) If the thread breaks off before you get to the opposite selvage just pull one next to it.

Remove the pulled thread(s) and press your linen. You should be able to see a clear straight line made by the gap where the thread was. Cut carefully along this line.

Repeat this for the opposite raw edge of your linen.

You will have a roughly 16-inch wide by 58-inch long piece of linen at the end of this process.

Press one of the raw edges in 3/4-inch twice towards the wrong side.

Lay the pom pom trim along the folded edge so that the pom poms just stick out beyond the edge.

Fold and pin the bottom of the doubled 3/4-inch fold in half upwards so that it covers the tape of the pom pom trim.

Using your machine’s zipper foot edge stitch along the very outer edge of the folded linen, making sure not to sew into the pom poms.

This will encase the tape of the pom pom trim.

Next, still using your zipper foot, edge stitch the inner edge of the fold down.

Repeat this for the opposite raw side of the linen.

The side with the sewn down folds is the wrong side.

Sewing the Cowl Together

With right sides together pin the selvages of the linen together. Cut off the last 2 pom poms on each end.

Sew the selvages together with a 1/2-inch seam allowance.

Press the seam open and flat.

Edge stitch the seam allowances down.

Turn the piece right sides out and the seam should look neat and flat like this.

Press the cowl and you’re all done. It should be worn with the seam in the back. 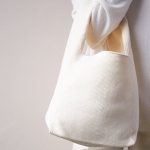 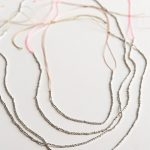