Knit Front and Back (kfb)

Knit Front and Back (kfb) is a very common single increase that turns one stitch into two. On the knit side of stockinette, a kfb looks a bit like a purl stitch, and in fact, it is sometimes called a “bar increase” because of the horizontal “bar” on the increased stitch.

Give the kfb a try on your own or follow along with our video tutorial below. 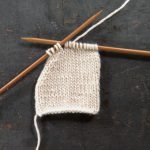 PRINT
10 comments
Close
Thank you for subscribing!
TO TOP