Like ducks in a row, a flock of pom poms arranges itself along the edges of our Pom Pom Trim Scarf. Combining classic seed stitch with a whimsical wink of bobbles, here is a beautiful balance of practical and playful!

In our Super Soft Merino, this cozy scarf is a warm, thick cloud, quick to knit and wonderful to wear.  For the pom poms, we used two of our Appleton Tapestry Wool Bundles, each an octave of orchestrated tones from light to dark. Choose from 9 pretty bundles, including this one, Rose Garden, which ranges from pale pink to deep garnet.

Want to make your pom poms as round and dense and fluffy as ours? Pick up our Pom Pom Maker Set and check out our Pom Pom Tutorial. With both, you’ll be equipped to create your own row of incredibly irresistible pom pom ducklings!

Share your progress and connect with the community by tagging your pics with #PurlSoho, #PurlSohoBusyHands, #PurlSohoPomPomTrimScarf, and #PurlSohoSuperSoftMerino. We can’t wait to see what you make!

Cast on 27 stitches. We used a basic Long Tail Cast On.

Repeat Row 1 until the piece measures 68 inches from cast-on edge.

Weave in the ends.

Following Purl Soho’s Pom Pom Tutorial, use the two Appleton Tapestry Wool Bundles to make 16, 1¼-inch solid colored pom poms. For each pom pom, wrap all but 12 inches of the skein around the Small Pom Pom Maker. Save 12 inches of tapestry wool to secure each pom pom. Make sure you don’t clip its tails when you trim your pom pom… You’ll use them to attach the pom pom to the scarf!

Trim the pom poms as needed and steam if desired. 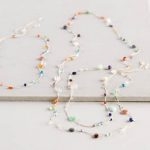 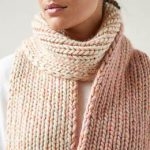 PRINT
33 comments
Close
Thank you for subscribing!
TO TOP