Nani Iro’s Quilted Double Gauze is just one of those fabrics that makes you want to sew! The prints and colors are absolutely beautiful, and if you’re long on inspiration but short on time, the fact that it’s pre-quilted opens up a world of potential. With the fabric doing most of the work for you, our Puffy Tote in Nani Iro’s Quilted Double Gauze couldn’t be easier to make, and we love its unique structural charm… Like a soft and puffy cloud that happens to hold all your stuff! -Molly Use your machine’s walking foot for all of the sewing in this pattern.

From the fabric, cut…

From the bias tape, cut…

From the webbing, cut… Sew along the bias tape’s crease, as shown above. Pull the folded edge of the bias tape over to the right side of the fabric. Pull it so that the folded edge is just a bit beyond the seam you just sewed. Pin this fold down. Edgestitch along the edge of the fold to sew down the second side of the bias tape.

Using the second piece of 18-inch bias tape, bind the other 18-inch edge of the fabric in the same way.

Sew this tape down along the fold, just as you did for the other sides. Pull the folded edge of the bias tape over to the right side of the fabric, and pin it down as you did for the other sides, except before you pin down each end, fold the 1-inch overhang under to neatly finish. Edgestitch along the edge of the fold.

With the remaining piece of bias tape, bind the second long edge of the fabric in the same way.

This is now the Bag Panel, and it’s ready to sew… Fold one of the short sides of the Bag Panel 1 inch towards the wrong side. Press and pin this fold into place. With the wrong side of the Bag Panel facing up, insert one of the raw ends of one of the webbing pieces under the fold, 4 ½ inches from the left corner. Pin the webbing into place. Then, making sure not to twist the webbing, insert the second raw end under the fold, 4 ½ inches from the right corner. Pin it into place, as well. Sew down this fold just above the top edge of the bias tape. Flip up the webbing so that it’s lying above the Bag Panel and pin it in this orientation. To secure the handle, sew a seam a ¼-inch from the top fold along this whole side.

Repeat these steps on the opposite 18-inch side of the Bag Panel, folding the bound edge and adding the handle. Sew each pinned side together with a 1-inch seam allowance. This is now the Bag. Pin the two sides of the Bag together along this line and then sew along the line.

Repeat for the opposite corner of the Bag. Now turn the Bag right sides out. The boxed corners fold automatically to the bottom of the Bag, and you’re all done! 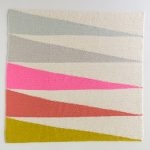 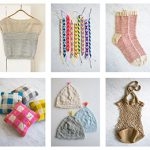 PRINT
20 comments
Close
Thank you for subscribing!
TO TOP