Every Christmas Eve my family and I dress up, drive to the city, and climb the grand staircase of the War Memorial Opera house for the San Francisco Ballet’s performance of the Nutcracker. As an adult I’ve come to appreciate the beautiful music and dancing, but as a kid it was sometimes a little hard to sit through the whole ballet. However, I always did look forward to the second act with its amazing Land of Sweets, a magical place where confections pirouette and pas de chat into life! Inspired by the Land of Sweets, my Taffy Twist Felt Garland uses a rainbow of brightly colored felt that would be right at home in the costumes of the Russian Candy Canes and Mother Ginger’s Children. And best of all, it’s so easy to make that even a kid who has trouble sitting through a ballet will be able to help! Super simple to whip up and adorable to have around, this garland is sure to join my family’s other wonderful traditions! Here’s to a sweet holiday crafting season! -Molly You will have enough felt to make a garland approximately 234 inches long. The one shown here is 91 inches long. Cut a ½-inch by 18-inch strip from each piece of colored felt. You will have seven colored strips.

Cut seven ½-inch by 18-inch strips from the ecru felt.

(If you are making a longer or shorter garland, just make sure to cut the same number of ecru strips as colored strips.) Pick a pleasing color order for the colored strips.

Then, using the invisible thread, zigzag stitch the two sides together, making sure that the stitching is catching both pieces. Zigzag across this ½-inch area forwards, backwards, and then forwards again to secure the join. Repeat with all subsequent colored strips.

Sew all of the ecru strips together in the same way.

You now have two long strips: one ecru and one that transitions through all of the colors. Notes: In this section I will refer to the ecru strip as Strip A and the colored strip as Strip B. Also, this garland is folded in the same manner as a paper spring, which you may have made in grade school!

Sew the ends of  Strips A and B together at a right angle, stitching a little square where the two pieces meet. Orient the strips so that they look like the above picture: Strip A is vertical and on top of B, and Strip B is perpendicular to the left and underneath A. 1. Fold Strip B at a right angle to the right over Strip A. 2. Fold Strip A at a right angle downward over Strip B. 3. Fold Strip B to the left over Strip A. 4. Fold Strip A upward over Strip B.

Repeat Steps 1 through 4, keeping the folds neat and straight as you go. Since the strips you’re working with are so long, it’s a good idea to roll them up so they don’t get tangled as you fold. When you reach the end of the strips, pin the two ends together and then sew them with a little square, just as you did for the beginning. Give Your Favorite Purl Bee Project! 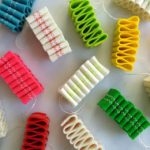 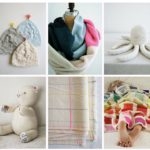 Give Your Favorite Purl Bee Project!

PRINT
18 comments
Close
Thank you for subscribing!
TO TOP