Twinkling lights on park trees and glass balls hung in shop windows,  little by little it’s beginning to look a lot like Christmas in New York City! I know some people can be a bit Grinch-y about the commercialism of the holiday season, but it’s hard to resist the special feeling of Christmas in the city. It’s contagious! Inspired by this burgeoning holiday cheer, we’re starting to feather our holiday nests with these lovely felt ornaments. Laura designed an elegant 3-dimensional Felt Star that will look equally beautiful hung from a doorway or perched atop a tree. And Molly designed a set of graceful Felt Snow Ball Ornaments that will add a playful Christmas feeling to your tree or mantle.

Felt is our favorite ornament-making material because it’s soft, natural, and so easy. Ecru is especially lovely because it’s peaceful, classic, and reminiscent of a fresh blanket of snow.  And to add a little holiday sparkle we accented our ornaments with the beautiful new DMC’s Silver Metallic Embroidery Floss. -Laura Place the smaller of your two pairs of squares to the side for now. Using a pencil, on one of the larger squares of felt, mark a dot half way from the middle of each edge to the center of the square.

Repeat for the second of the larger squares. Fold and pin the marked squares in half so that their marked marked sides are facing out. Using the cotton thread, sew along the folded edge with a whip stitch, from pencil mark to pencil mark. This will create a ridge. Repeat for the second square. Fold the two larger squares in half again, this time in the opposite direction, perpendicular to the previously sewn ridge. Once again, using the cotton thread, sew along the folded edge of each square with a whip stitch, from pencil mark to pencil mark. This will create a second ridge. Flip the squares over so that the ridges you just created are facing down. Fold the squares in half diagonally, aligning the corners, finger press the fold and pin. Fold the squares in the opposite diagonal direction, finger press the fold and pin. Once again, using the metallic embroidery floss, sew along the fold with a whip stitch. Start 1/4-inch from one end of the fold and stop 1/4-inch shy of the other end. These are the Front Star Pieces Flip the felt over so the marked side is facing up. Cut the felt from each pencil mark to the adjacent corners. Now, on the pair of smaller squares, use a pencil to draw a line down the center of both squares in both directions.

Cut the felt from each pencil mark to the adjacent corners. These are the Back Star Pieces. Align the corners and pin one of the Back Star Pieces to the a Front Star Piece at all four corners. Repeat for the other set of Back and Front pieces. Using 1 strand of the metallic thread and starting in a corner, sew along all 8 sizes of one of these pinned together pieces with a whip stitch thus sewing the back piece to the front piece. Do this with Front Star Piece facing you. Repeat for the other pinned together set of Back and Front pieces. If you’d like to hang your Felt Star, using the cotton thread, metallic thread or invisible thread and a needle, pull a strand through one of the points of your star. Cut and tie it off at your desired length to hang your star on a tree or in a doorway or over your dinner table!

Or, to use this Star as a tree topper, simply leave the Star without a string and place it on top of your tree, gently sliding the top branch between two of the sewn points connecting the two star halves. 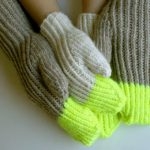 Trio of Woven Scarves
TO TOP

Leave a Reply to Lisa