Spring is here on our calendars, but it sure doesn’t feel like it here in New York! Everyone is still walking around bundled up in… you guessed it, cowls! They were the word on the street this winter when we brought you the Big Herringbone Cowl, and as we move into spring, cowls are here to stay, now in cool cottons and spring colors. It’s really no wonder we love the cowl: no questions of wrapping or tying, no loose ends dragging through mud puddles and no getting caught in subway doors! I’m sold!

And so for spring, I decided to make a cuddly soft cotton cowl because April is no picnic! For the main yarn we chose Blue Sky’s superlatively cozy Worsted Cotton in the subtle color Drift, a pale, pale gray, almost white. To it we added Olympus’s Sashiko Thread in bright, beachy stripes. The simple matte cotton of the Sashiko Thread and the casually natural Worsted Cotton conspire to make a no-fuss cowl with a whole lot of style. A little off kilter, a little rustic and a lot charming!

With the Main Yarn (MY) and the Off White Sashiko Thread, use a Provisional Cast On to cast on 36 stitches. (Why a provisional cast on? So that at the end of the project you can graft the cast on and cast off ends together, avoiding a seam. However, if you find a provisional cast on a bit overwhelming, then just cast on normally, and when you’re finished you can sew the two ends together. Your cowl will still be beautiful!)

With the MY and the Orange, knit 15 1/2 ridges. Cut the Orange Thread.

With the MY and the Yellow, knit 7 ridges.

You will continue in this pattern, cutting the old Thread at the end of each section and adding the new Thread at the beginning of the next section. Here is how the stripe sequence continues:

Bring the ends of the cowl around to meet each other, making VERY sure that there are no twists in the fabric (unless, of course, you intentionally want one!).

Pick up the 36 stitches of the Provisional Cast On (check our tutorial for how-to’s), making sure, if you’re using straight needles, that the ends of your needles are pointing the same way. If you’re using circular needles, you’ll need to ensure that the tail is situated at one end, not caught in the middle of your needles.

For the grafting to be seamless you need one end of the cowl to have ended on a purl row and the other end to have ended on a knit row. Look closely at the rows closest to your needles and double check that this is the case. If it’s not, then take out the last row you knit, and reorient your stitches on the needle so the tail is still at the end.

Here’s how ending with a purl row looks (see how the purl bumps are snug up against the needle?):

And here’s how ending with a knit row looks (see how the last row looks like little “v’s”, aka knit stitches?):

Now thread the tail onto a tapestry needle and you’re ready to begin the Kitchener Stitch.

NOTE: For a detailed Kitchener Stitch tutorial, click here. It’s important to know that our tutorial shows how to graft two pieces of stockinette together, while here we’re grafting together two pieces of garter stitch. So the order of our steps will be slightly different than the tutorial’s, but you may still find it very helpful.

The first two steps of Kitchener Stitch are set up steps and only happen once at the beginning. Holding the two knitting needles parallel to each other, thread the yarn through the first stitch of the FRONT needle (the needle closer to you) as if to PURL and LEAVE the stitch on the needle.

Next, thread the yarn through the first stitch of the BACK needle as if to PURL and LEAVE it on the needle.

That completes the set up. Continue…

Step 1: Thread the yarn through the first stitch of the FRONT needle as if to KNIT. REMOVE the stitch from the needle.

Step 2: Thread the yarn through the next stitch on the FRONT needle as if to PURL. LEAVE it on the needle.

Step 3: Thread the yarn through the first stitch on the BACK needle as if to KNIT. REMOVE it from the needle.

Step 4: Thread the yarn through the next stitch on the BACK needle as if to PURL. LEAVE it on the needle.

A LITTLE TIP: After years of messy grafting, I’ve finally learned that holding my index finger between the knitting needles creates good tension and a neat finish! Like this:

Now all that’s left to do is to weave in any ends you have left and to enjoy on your new Striped Cotton Cowl! 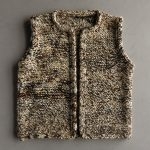 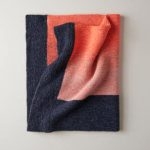 Leave a Reply to Katiusca